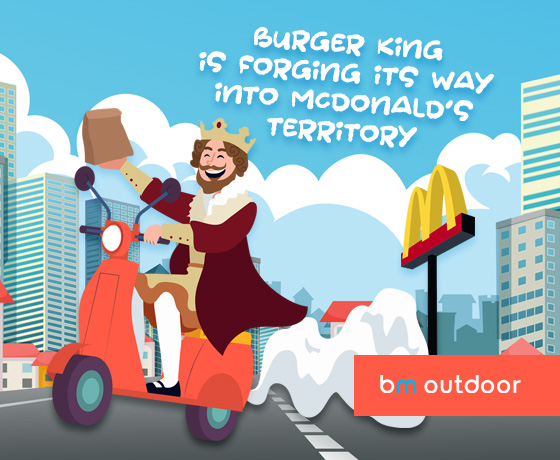 Burger King Finland is at it again. The same QSR chain that brought us the “silent drive-thru” last year is now offering free delivery to Helsinki residents who are physically close to a McDonald’s but instead choose to order Burger King.

The so-called conquesting campaign uses out-of-home advertising and mobile technology to target McDonald’s users in an attempt to win them over to BK’s side of the fence. To do that, BK placed outdoor ads strategically near McDonald’s locations (see image above) and then partnered with local delivery service Wolt to turn these areas into delivery hotspots. The stunt was publicized with an influencer campaign, which ended July 1.

This isn’t the first time BK has employed tech to lure would-be McDonald’s customers away from the Golden Arches. In 2019, the chain used geolocation technology to prompt customers already inside McDonald’s to leave within a certain timeframe and get a 1-cent whopper. That promotion featured a whole tie-in with Pennywise the clown and the release of It Chapter Two, further gamifying the experience.

The Finland campaign comes at a time when many places in the world are just now easing up on their lockdowns. Prior to this, out-of-home advertising hasn’t been all that effective since everyone’s been at home. One research firm predicted a decline in out-of-home advertising over the next few years, since this particular ad type relies on places like subway cars and bus shelters. But on that note, Adweek noted in April that brands were shifting their out-of-home advertising spend to focus on areas still getting foot traffic. Given the uncertain trajectory of the coronavirus and the threat of another lockdown ever present, it remains to be seen how effective this style of advertising will be over the long term.

One thing that could have a major effect: dining rooms shutting down again. McDonald’s has already announced it is halting its reopening plans for another three weeks in the U.S. BK’s contesting campaign is only focused in Finland right now, and wouldn’t actually rely on in-restaurant foot traffic at McDonald’s to work. Nonetheless, it’s another example of the pandemic’s far-reaching effects on the restaurant industry, right down to its advertising tactics.

In the meantime, the Finland campaign is at least an amusing tactic to lift the spirits. It’s also a way for restaurants to promote delivery at a time when many dining rooms are still shuttered and customers are still wary about actually setting foot in a restaurant.