Its (Mostly) Official: Lego Is the Worlds Most Loved Brand 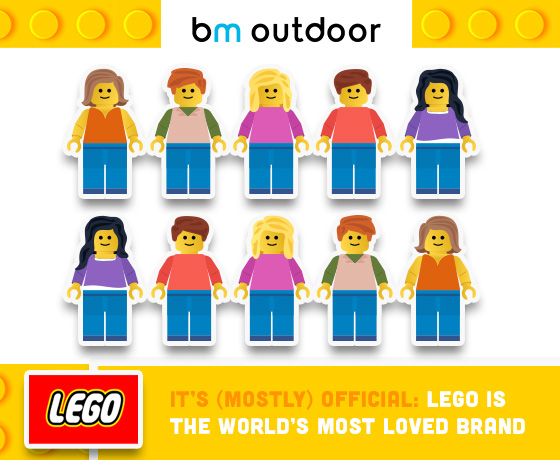 Scholars and philosophers throughout the ages have maintained that love is an emotion beyond measure. But what about brand love—the affection that consumers feel for the goods and services they can buy? That emotion, apparently, will readily submit to science.

Case in point: Social analytics firm Talkwalker has just released its list of the world’s most loved brands. At the top of the roster: Lego, the toy that sells seven sets a second and has made enough of those multicolored interlocking bricks for every person on planet Earth to have 80 of them.

It’s not especially surprising that Lego would make a brand hit list. The toy has become a staple of childhood (and, increasingly, adulthood too) for several generations now. Last year, for example, when Lego CMO Julia Goldin asked a packed Debussy Theater at Cannes Lions how many attendees had played with Lego as children, nearly every hand in the house went up.

But that Lego held the global top spot? That’s a little unusual—as were other “loved” names on the Top 10 list, including The Container Store, Four Seasons Hotels and Tiger Beer.

Most rankings of brands that are tops with consumers tend to be dominated by megacorporations and, in recent years, skew heavily to the tech side of things. Google, Amazon, Apple, Instagram—all are among the brands one sees repeatedly. By contrast, Talkwalker’s top tier not only contained a pharmaceutical company (Vertex, which makes cystic fibrosis drug Trikafta) but brands that many Americans would be hard pressed to identify, including Vroot (an international competitor to Netflix) and Bimbo (a Mexican bakery chain).

So what gives? As with other studies, Talkwalker took to forums including social media channels, news sites and blogs in search of postings and discussions about brands (718 brands and 750 million mentions). But while the firm looked for positive comments—including outright declarations of love for brands—it did not figure the raw number of those positive comments into its formulation. That’s because the world’s largest brands will, almost by definition, generate the most commentary by simple virtue of their size and reach. Instead, “we measured instances of phrases like ‘I love it when’ or ‘I would love if’ near mentions of the brands, giving different weights to those mentions if they occurred on social media or in the press,” Todd Grossman, Talkwalker’s CEO for the Americas, told Adweek. “This gave us a unique list of companies that have cultivated passionate fans, if not perhaps the largest number of mentions.”

By Talkwater’s calculus, brands that are loved are ones that build what it calls “vital emotional connections” with consumers. Those connections are, in turn, created through a variety of methods. These include tangible measures like having good customer service, a vigorous sponsorship program, and maintaining a high standard of corporate social responsibility. Also in the mix were softer attributes such as creating a feeling of nostalgia—reminding consumers of a brand’s historical relevance—and employee advocacy: Consumers are more likely to love a brand known for treating its employees well. Active engagement with influencers and fans also played a significant role in creating connections that lead to consumers loving a brand.

Which also explains why Lego topped the global list. “Lego placed tops because out of the 11 brand-love traits we measured, they hit theirs extremely well,” Grossman said. “Globally, the creative act of playing with bricks is universal and needs little translation. The brand has shifted to the social age marvelously with engaging content across all platforms, using influencers and user-generated content and TV shows amongst other content delivery vehicles.”

So engaged is Lego with its fan base that Lego Ideas—the division that invites enthusiasts to send in ideas that might be used to create new official sets—recently issued a new activity called Good Enough to Eat, inviting people to create food items like a hamburger or sushi out of Lego bricks. No doubt, many of them will. After all, they love their Legos.