TRUCK-SIDE ADVERTISING AND THE HOLIDAYS 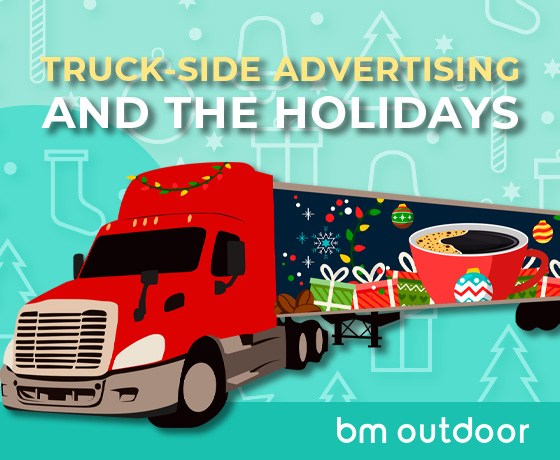 It may only be August, but for most companies, the holiday season is quickly approaching. As early as Thanksgiving

many consumers are on the hunt for the perfect gifts for friends and family — making this time of the year particularly important for consumer packaged goods (CPG) brands. In 2019, the holiday season brought in an average 30% of a retailer’s sales for the year which translates to a record $1.007 trillion spent on e-commerce and brick-and-mortar.

With the holidays this year looking a lot different than the past, companies are implementing new strategies, and many are turning to OOH truckside advertising. Often underutilized, blank sides of trucks are being transformed into mobile billboards, captivating large audiences wherever they may be – on the road, out-and-about, and ironically in homes too. These truckside advertisements can help bring your product or brand to life and deliver the holiday spirit directly to your target market — all at a fraction of the cost when compared to other large format mediums.

With everyone quarantined in their homes these past few months, it’s no surprise that the e-commerce and home delivery market has experienced huge growth during this pandemic. As such, while billboards and signs in commercial and retail spaces began to go unnoticed, truck advertisements were still being seen and gained even more exposure around hard-to-reach residential areas.

And with the e-commerce spend projected to increase by 13.9% towards the end of 2020, it looks like fleet wraps may be the most promising solution for brands to hyper-target their audience right before the holidays in a big way. Vibrant, bold, and striking — driving larger-than-life moving visuals through multiple major cities and busy neighborhoods ensures you achieve top-of-mind consumer awareness. While garnering 30,000 to 70,000 targeted impressions per truck per day, your own fleet of trucks acts as an extension of your brand and shows others that your business is booming and busier than ever.

One of the most awe-inspiring OOH truckside holiday ads is Coca-Cola’s Christmas Truck Tour. Starting out as an advertisement on TV in 1995, the Coca-Cola Christmas caravans quickly became a symbol of the beginning of the holidays and one of the most famous Christmas TV ads of all time. Through the use of over 30,000 bright light bulbs twinkling, the soundtrack of “the holidays are coming” and sleigh bells chiming, and an image of Santa Clause raising his Coke to his admirers, Coca-Cola created a magical and immersive world for their consumers. Due to the enormous amount of engagement that this ad produced, Coca-Cola decided to roll out real trucks all over the world in 2001, giving out free Coke bottles along the way. Between 2011-2015 roughly 3.5 million visitors came to visit the trucks, some even waited hours for a free Coke — and that’s just in the UK!

Coca-Cola ingeniously shifts its marketing strategy to generate nostalgia, excitement, happiness, and holiday cheer in their consumers. While at the same time – expanding their campaign to become a yearly event. Additionally, the truck-side ads ability to travel from location to location allows the trucks to become a physical representation of Santa’s sleigh, bringing joy and goodies along the way. Last year, Coca-Cola launched its largest ever Christmas campaign, including the Christmas truck tour that stopped at 19 different locations. The truck tour has always been and will continue to be a huge success for Coca-Cola because – when done right – the power of OOH truckside advertising is unmatched.

Anheuser-Busch is no stranger to truckside advertising, either. Since 1933, the Budweiser Clydesdales have become an iconic symbol celebrating the repeal of prohibition in the U.S (December 5th). Every year, Budweiser’s herd of real Clydesdale horses and fleet of similarly-decorated trucks travel across the nation and stop by at Christmas festivals to encourage people to stop, and enjoy a beer.