HOW TO FIND A BURGER KING THAT ISNT THERE? 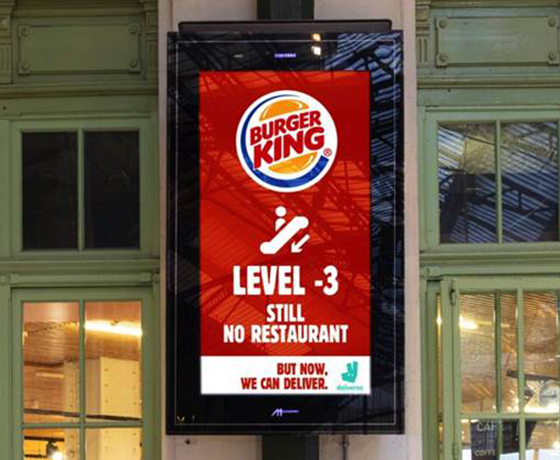 Thats not an existential question, though it is admittedly an odd one posed by the burger chains new outdoor campaign from agency Buzzman.

A series of new out-of-home ads for Burger King France seem, at first glance, to offer directions to the nearest location. That’s not too odd, given the recent trend of creative ads that point viewers to restaurants, be it via Canada’s cropped Golden Arches from agency Cossette or the meandering fries used as arrows by TBWA\Paris.

But this time, the ads point you to…nothing. Instead, they each highlight one of the many places you won’t actually find a Burger King. The message of consolation: “But now, we can deliver.”

Burger King has 328 locations across France, which obviously pales in comparison to the more than 7,000 found across the United States. According to Buzzman, the brand decided to lean into the occasional gaps in its French footprint as a selling point for its delivery option in the market (via Deliveroo) rather than as a weakness.

The ads will be on display in France throughout November. It’s unclear if the out-of-home placements are all in English, as shown in the supplied images here. Adweek reached out to the agency for clarification and will update this story when we hear back.