Why Do People Notice Billboards? 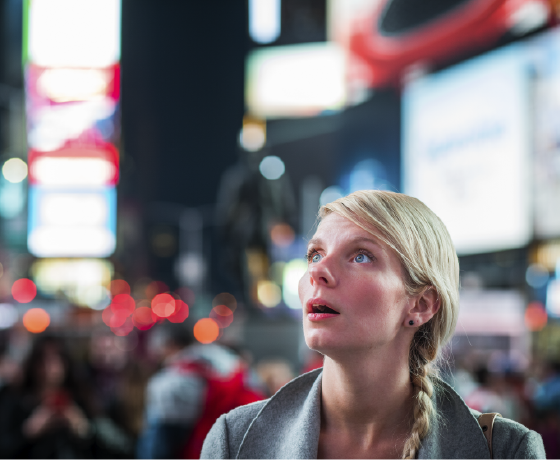 There are three main reasons why people notice billboards

This media remains well-positioned to capture attention, even in the digital era. In fact, if anything, digital billboards are even more eye-catching than static ones. This has helped out of home (OOH) advertising stay relevant at a time when so many traditional forms of marketing have fallen out of favor.

To understand why billboards continue to be noticed, you need to understand how much time we log in our vehicles. It’s a lot. Americans spend an average of 17,600 minutes in their cars every year. That’s more than 293 hours annually.

The average person drives between 31.5 and 26.2 miles per day, depending on the season. And adults 30-49 log the most miles behind the wheel, at 13,506 per year. What does all this mean? The more time people spend in the car, the more time they look at their surroundings. And that, of course, means more time spent noticing billboards. How can we be sure? Let’s examine some more research.

PEOPLE SEE BILLBOARDS ON THE ROAD

Arbitron did a survey that showed huge levels of engagement for billboard advertising. The company found:

Two-thirds of respondents reported seeing a billboard in the past month. 80% of billboard viewers looked at the advertising message some of the time, and half did it all the time.

Even those on public transportation noted the billboards around them, with 66% of bus and taxi riders saying they had seen one in the previous month. This is particularly notable, because it negates the claim that people are just looking at their phones when they are passengers. This answer proves they still look out the windows.

Clearly, billboards attract attention. There’s a lot to be said for an audience that can’t turn away. When someone is driving, they have no choice but to pay attention to the road. That’s not so with other media, such as TV or radio. You can do other things while you watch a TV show or listen to music, such as browse your mobile device. When you’re driving, you have to keep your eyes on the road — and hence see those billboards.